by Nikki Florio of the Bee Heroic Project

The Sixth Great Mass Extinction on Earth is happening right now. Mass Extinctions are accelerated extinction events where losses of plants and animals who’ve existed on Earth for millions of years, die out, en mass, within a short geologic period. Current losses are between 200 – 300 species of plants and animals each day. A great living organism, Earth – like our own bodies – need certain entities to stay healthy and intact.

Unfortunately the more animals and plants we lose, the more we stand to lose. From native bees, to beetles, bats, lizards, flies, honey possums, sugarbirds and more, impacted ecosystems are causing pollinators to decline in record number. Both predator and prey, the insect world itself, is in gross decline, wreaking havoc on it’s own predators who range from bats and birds, to amphibians, lizards and other animals.

There are several known factors involved in the losses of pollinators on Earth today. Loss of habitat, and therefore forage, toxins from conventional agriculture – pesticides (conventional and systemic), fungicides, herbicides, inorganic fertilizers, genetically engineered/bioengineered crops – and among honey bee populations, too many inexperienced backyard beekeepers (who spread disease and cause distress for other reasons, among honey bee populations) – and conventional cell tower emissions.

It is the unknown factors that we at Bee Heroic focus on. These impacts are a collection of abstruse technologies which can be exercised individually, or in conjunction, and are having grave impacts on global pollinators and other species. They include: Geoengineering, 5G, and advanced genetic engineering. The big, bad, G’s.

Geoengineering: Defined as deliberate, large scale intervention of Earth’s natural systems to counteract climate change, this technology is executed for a variety of reasons. Utilizing different technologies, these programs are executed throughout the world without the general knowledge or consent of farmers and/or community members.

From commercial uses, to military, and aiding in climate “mitigation”, these technologies are impacting our pollinators on a global scale. Mainstream media has finally started to cover basic projects listed as “Solar Radiation Management” (SRM) and “Carbon Dioxide Removal” (CDR), however it continues to fail in reporting environmental impact statements. (EIS); as well as solutions to the impacts.

5G: 5G, or Fifth Generation Telecom, is the foundation of the Internet of Things (IoT). The IoT is the connection of billions of devices on Earth. From driverless cars, to faster downloading of movies, to being able to know if your child has pooped in their diapers, people will be able to know everything, and do almost anything they need to, from their cellular and computer devices. In order for the IoT to function well, millions of new small cell towers are being erected throughout the states, and around the world. These towers will emit microwave radiation at frequencies nearly 10,000X higher than current 2-4G cell stations. The 5G high frequency, millimeter wave (mmWave) technology is deadly to insects, birds, small mammals and makes every part of plants nearby, toxic.

In addition to millions of new towers spread throughout neighborhoods, across states, near farmlands, and riparian areas, thousands of low Earth satellites will be launched into space; each rocket launch will release barium further damaging the ozone which protects the crops and plants our pollinators need for food and shelter.

Big Ag: In addition to the chemicals, genetically altered crops and animals created by the agrochemical industry, we must now be aware of the emerging bio and nanotechnology industries utilized by these corporations. Genetically engineered bacteria, viruses, insects, and other elements are bio-pollutants, meaning, that unlike chemical pollutants, many can reproduce – wrecking havoc on natural and native species; destroying soil foundations, plants, pollinators and more.

Bee aware. Bee proactive. Bee heroic.
With today’s technology and mainstream media’s marketing of products and services designed to keep consumerism going, many people are distracted by benign movies, television, sports, and other frivolous means of entertainment. If we are to halt the current ecologic destruction and mass extinction event, and save our pollinators and ourselves, we need to be informed of issues and the impacts they have. Doing independent research on the unknown factors of pollinator losses means giving your
time and energy to something truly meaningful.

Here is a list of ways you can help keep our extraordinary pollen nation and Earth healthy:
Be a conscious consumer:
• buy only what you need (Reduce, Reuse, Recycle. “Reduce” is first for a reason.)
• purchase organic and true sustainable food and products (when you purchase organic/biodynamic foods you support organic farms )
• don’t use or purchase “garbage waiting to happen” (straws, paper cups, plastic holiday/birthday/wedding decorations that will be thrown away at the end of the day, balloons, etc.)
Take meaningful action. Stop the Big Bad G’s.

Michele Colopy, LEAD Co-Founder, holds a Master’s degree in Nonprofit Management/Arts Administration. She has more than twenty years of nonprofit experience at the national, state, and local level. She has worked with membership associations, pollinator advocacy, performing arts, housing and homelessness, foreclosure prevention, community development, and health and wellness. She was Treasurer of a State Association from 2016-2019 modernizing the accounting, co-managing a USDA grant, administering the Affiliate program, and managing two grant programs. She was the Program Director of a national pollinator advocacy NGO 2013-2019.

World Bee Day is May 20! Learn about pollinators, learn how you can help protect pollinators; take action to protect bees and other pollinators, your food supply, and a healthy planet. 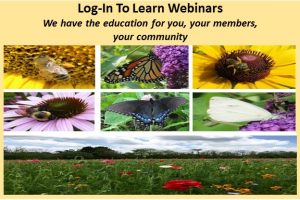